On 23rd of October, a partial solar eclipse would occur that would visible throughout North America and eastern parts of Russia. This eclipse will not be visible in India at all and hence there is no effect on persons residing in India. This is the day when we will be celebrating Dipawali – Lakshmi Pooja.

On 8th of October, a total lunar eclipse would occur that would visible throughout most of North America, South America, eastern Asia – China, Japan, Korea etc., and Australia. The information about the extent, duration and the visibility on Earth can be obtained through this site – NASA Map and Eclipse Information.

In India, this eclipse will be visible at moonrise only in the extreme eastern part of the country – parts of Assam, Manipur, Nagaland and Arunachal Pradesh. Eclipse is not visible in the rest of the country. The effect of eclipse should not be considered in the places where it is not visible.

Earth always casts a shadow in space. As an astronomical phenomenon, a lunar eclipse occurs when the Moon enters the Earth’s shadow. If the Moon enters the umbra, it is a total lunar eclipse. If only the penumbra touches it, it would be a partial lunar eclipse. Thus Moon opposite Sun, passing through the ecliptic would cause an eclipse. The points of ecliptic where lunar orbit intersects solar orbit are Rahu and Ketu. Therefore, using astrological parlance, lunar eclipse occurs when Sun and Moon are in opposition (7th house) from each other, conjunct with Rahu/Ketu.

A chart is cast for 3:50 AM, October 8th 2014 for San Francisco, CA, USA when Sun and Moon at 180° apart is presented here. This is 3 hours before the sunrise in the Bay Area, which is approximately at 7.15 AM Pacific time. The current Lunar eclipse is occurring in Pisces sign and Revati Nakshatra. At the time of eclipse, Venus is 7th from Moon/Ketu and Jupiter aspects Moon/Ketu.

On August 18, Venus and Jupiter will be conjunct. They will come close to the exact longitudinal degree early morning on August 18. Both Jupiter and Venus are pretty bright planets and thus it will be a great planetary spectacle in the early morning sky during this while.  This conjunction is happening in the Cancer sign and Pushya Nakshatra at Cancer 13°, hence very close the middle of the sign and will be thus visible in the sky. Since they will be rising in the sky before sunrise, it it a possibility to photograph the event too. I will certainly try.

Venus is a fast moving planet. It zips through the sky moving from one sign in the horoscope to another in a matter of weeks. Therefore, a conjunction on Venus with Jupiter (or other planets) in a horoscope is not-so-rare phenomenon. It occurs once every 14 months.

Saturn and Sun are in opposition now. As of May 10th 2014 afternoon, Saturn is at 25Li57 and Sun is at 25Ar55, which is almost 180° apart from each other. This is pretty interesting time for astrologers as this means that both Sun and Saturn are exalted.

This isn’t a very good combination in a horoscope though as Sun and Saturn are natural enemies and both are poles apart in their qualities. Whichever lagna the birth occurs in, they will keep opposing each other in the horoscope along the Aries/Libra axis. They will oppose each other through the self/spouse (1st vs. 7th house), family/melancholy (2nd vs. 8th house), hard work through own means vs. luck factor (3rd vs. 9th house) in the horoscope. It is like saying in Hindi, एक म्यान में दो तलवारें नहीं रह सकतीं.

Lord Shri Ram had this combination in his horoscope– Saturn being in 4th house and Sun in 10th house in His janma kundali.

Saturn is retrograde during this period. Saturn remains retrograde from 2nd March 2014 through 21st July 2014.

As they are in exact opposition, it means that Saturn rises when Sun sets and pretty much remains visible throughout the night. Astronomers will have a good time watching the planet now. Check this site out http://www.astronomy.com/observing/sky-events/2014/05/saturn-shines-brightest-in-may that says:

Opposition marks the peak time for observing any outer planet. Not only does a distant world then remain visible all night and shine brightest, but it also appears largest through a telescope.

Transit of Venus and Combustion

On June 06, 2012, in a very rare astronomical phenomenon, Venus will move across the disk of Sun and can be seen as a black spot if viewed properly through a telescope. It will be visible in India as per this map from NASA. It is a rare phenomenon because the frequency is very low and although the last transit happened in 2004, the next one would happen only in 22nd century – on 11th Dec 2117 to be precise.

The horoscope of Lord Rama is presented in the article on Rama and Krishna. According to Ramayana, the date of birth of Rama is the Shukla Paksha Navami of Chaitra Masa. Unfortunately, there is no mention of any year or a reference to a date in present time through which an unambiguous claim can be made. Even more unfortunately, unambiguous in Kaliyuga means a reference to dates within the western calendar.

Rama and Krishna are arguably the two most important heroes of Indian mythology. 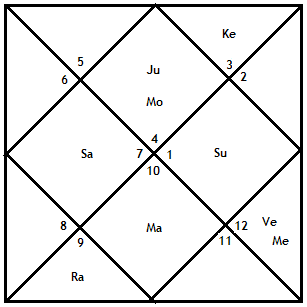 However, little effort has been made to understand the real timelines when they could have walked on this earth, in flesh and blood. I usually do not like to express my political views in this forum, but I

When scientists announced discovery of a planet beyond Pluto, Times of India ran an editorial describing this as a failure of modern Astrology and it not being able to keep up with changing times.

I am of an opinion that this was totally unwarranted, especially in relation with Indian Astrology. Indian Astrology was concieved and developed when none of the outer planets, i.e. Uranus, Neptune and Pluto were discovered. It has withstood the tests of times and has been working well, if the ability of the astrologer in question is not suspect. Western Astrology did try to change its workings and did associate some qualities with these planets, but Indian astrologers stuck with the list of old planets. The new research, if it happens, is also based on the knowledge that is passed on from the old sages.