In this article, I would like to point out certain differences that exist between the two systems – Vedic and Western Astrology. I will not comment on Chinese system of Astrology, because there is nothing to compare. It is so different from others that any attempt would be futile.
Zodiac Signs: Both Vedic and Western Astrology systems work on 12 signs from Aries to Pisces.
Nakshatras: Western Astrology does not recognize any nakshatra. In Vedic Astrology, nakshatras have gained almost as much importance as the zodiac signs themselves.
Planets: Vedic Astrology works on Sun through Saturn and pair of shadowy planets Rahu/Ketu. Western Astrology works on Uranus, Neptune and Pluto along with the usual suspects Sun through Saturn. This system does not recognize Rahu and Ketu. Since these three planets were discovered recently, there is no historical (rather statistical, if you can appreciate the number of years Vedic astrology has gained over Western Systems. Naturally the number of charts being interpreted correctly by the Vedic system is way high) basis of associating properties with these planets.
Uranus is supposed to behave like Jupiter, Neptune like Saturn and Pluto has been given properties like Mars. It would be interesting to know what these astrologers would do once NASA withdraws planet status from Pluto 🙂
Sun vs Moon and Ascendant: In Western Astrology, Sun is the main player. People are characterized as Leo, Scorpio types based on their Sun sign. In Vedic system, Sun does play a major role, but it comes behind Moon and Ascendant in importance. The Sun is the slowest among the three in its orbit around Earth (remember? we are still working on a geocentric system…) .
Ascendant changes sign once every two hours, Moon once in 2.5 days and Sun in approx 30 days. Giving more importance to Ascendant increases granularity and therefore accuracy. Otherwise, are all Scorpio men same?
Aspects: In Vedic astrology, it is called drishti. This means that a planet influences another planets or house through an angle. In Western Astrology, the aspects are conjunction, sextile, square, trine and opposition – i.e. 0, 60, 90, 120 and 180 degrees and this is the same for all planets. This does not fit exactly with the Vedic system. Individual planets have their own drishtis. e.g. Moon and Sun have only 7th house ( i.e. opposition ) drishi. Jupiter is capable of 120, 180 and 240 degree dristi. At this note, I would like to point out that dristis in Vedic Astrology are always forward looking unlike in Western astrology where both 120 and 240 are the same aspect which is called trine. Also, in Western Astrology, opposition is not considered a good aspect. It has separating influence. Planets in opposition are supposed to reduce each others strengths. In Vedic Astrology, opposition is considered good – opposition between Jupiter and Moon, Jupiter and Mercury is considered very auspicious.
Harmonic Charts: Western astrology does not have this concept at all.
Precession of Equinoxes: This is the biggest and most potent ammunition that the critics of Western Astrology have against the system. 2000 years ago when the sun was supposed to be in Aries, it was in Aries. Not any more… The earth keeps wobbling on its axis and this meant that in 2000 years, something drastic happened. Now when we say that the Sun is in Aries according to the western system, it may not be in Aries at all. It may very well be found within Pisces. Western astrology totally missed out on this concept. Naturally, the proponents of Western Astrology now discount the real zodiac and have build their system around an imaginary one – where first point of Aries is still around 21st March, called vernal Equinox, the first day of spring.
Merriam-Webster online dictionary describes precession as http://www.m-w.com/cgi-bin/dictionary?book=Dictionary&va=precession Etymology: New Latin praecession-, praecessio, from Medieval Latin, act of preceding, from Latin praecedere to precede : a comparatively slow gyration of the rotation axis of a spinning body about another line intersecting it so as to describe a cone. 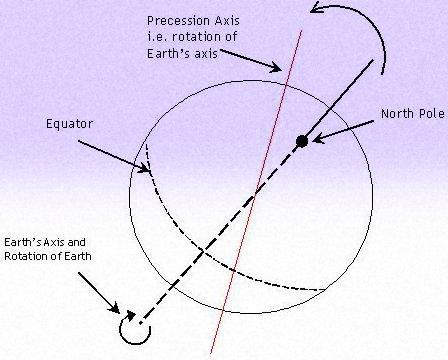 Look at this figure. Ok, there is a mistake here – the direcion of rotation of Earth is wrong – but that is besides the point. The Earth’s axis gyrates as well, which makes the earth wobble. This changes the point of view – although only by about 50″ a year. At the face of it, it is not a lot. But it makes a huge difference in a period of 2000 years. The underlying formulae change completely and a lot of them would not be valid anymore. That is why, to bring in continuity, we need the Ayanamsha Correction.
The western astrology follows tropical zodiac – which the Vedic system follows a sidereal one. Throughout the history of astrology in India and other countries of Indian subcontinent, the capabilities of the sages in terms of observation made them realize that there is a slip, or a wobble in the earth’s axis. There was a need of introduction of a factor in calculations called Ayanamsha Correction. This mathematical correction, which amounts to the slip in zodiac over a period of time converts the system from tropical to sidereal. After application of this factor, things fall in place. Sun, according to the sidereal system can really be observed within the zodiac sign that the calculations point to.
The two zodiacs last coincided in about 285 A.D. Assuming that the slip is about 50″ a year, these two systems would be apart by 180 degrees approx in 285 + 180*60*60/50 = 13245 years. i.e. when the Western System would say that Sun is in Aries, we would actually see it in constellation of Libra ! That would actually be quite funny.
Precession of Equinox means that the equinoxes are moving backwards – the vernal equinox lies no longer in Aries, it has moved to the constellation of Pisces. It is not as if western system is totally unaware of this precession. They have introduced a concept of “World Ages” and we now live in the age of Pisces. We would be entering the age of Aquarius in a few centuries. Hence precession is important only in terms of world ages for the western system, but is at the center of all calculations in Vedic Astrology.
In my site http://www.planetarypositions.com/, I have used Chitrapaksha Ayanamsha which has a sound basis in Purans, i.e. Vedic historical texts.
Predictive Systems: Vedic astrology attempts prediction via dashas and gochara. Broadly, dasha systems assign a period where a particular planet or set of planets exerts its influence. The most well known of these – Vimshottari (cycle of 120 years) dasha is calculated using the longitude of moon. There are other systems – as explained in Brihat Parashara Hora Shashtra. The other system Vedic Astrology uses is based on the current position of planets as compared to the positions at the time of birth of an individual. This system is called Gochara. Western system lacks the concept of dashas. The only predictive system they have in place is similar to Gochara.
All in all, I personally believe the western system of astrology is in a way crude and more ad hoc. Vedic astrology takes a more disciplined approach – with enough room for creativity and research. Modern pundits like Shri B. V. Raman, Sanjay Rath, J. N. Bhasin and Dr. David Frawley have done a lot of work and proposed theories which are very imaginative but well within the confines of the Vedic system at the same time.
Previous Next