Based on my email exchanges with Basab over the last few days, I realized that there is still a lot of confusion over how to enter values in the birth chart application to generate janma kundli and it is especially true for folks living outside India and those who live in places with daylight savings during a certain part of the year. Horoscope applications throughout the world (for either Western or Vedic Astrology) can programmatically determine if daylight savings is in effect for a place of birth at the time of birth. This programming, however, is not entirely foolproof. Moreover, the laws governing daylight savings can be changed by the government of the day. I have therefore chosen not to incorporate such a logic in the birth chart application on this website and prefer to take this input from the user.

The most important side effect of getting DST wrong is incorrect lagna both for rashi and other amsha (divisional) charts. The degrees of planets are not affected to that big an extent by mistakes in DST. If some margin of error is acceptable, one could potentially still look at all planetary positions from Moon rashi for general predictions. IMHO, two horoscopes should be cast, one with DST and one without it, and some sort of preliminary chart rectification techniques should be used to select one of them.

The three points that should be remembered while entering timezone and daylight savings time values in any horoscope application are:

1. Timezone never changes
All through the year, whether or not DST is in affect, the timezone of a place remains the same.

2. DST
One more parameter DST is taken into account during period of daylight savings or summer time, as it is known in countries within European Union. Clocks are moved forward by an hour during summer time. Therefore, in California, USA, the timezone will always be 8:00 W, and DST is either “Yes” or “No” depending on the time of the year.

3. How do we find out what the time zone is?
Assuming that you want to find out the local time zone, the easiest way is to look at the system clock in your Windows machine. Double click on the clock on your computer’s system tray and click on the timezone tab on the popup. Please refer to the image below, where it is shown that IST is 5:30 ahead of GMT (GMT+5:30) and Pacific time is 8:00 behind GMT (GMT-8:00). 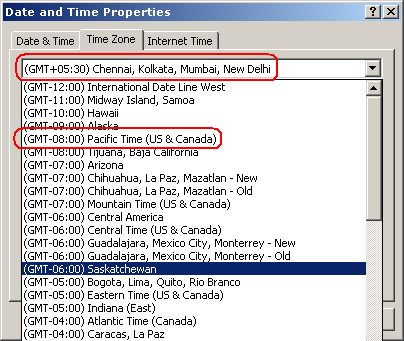 Sorry MAC fans, this is a screen shot from a Windows machine. Well, I don’t dig macs and I a’int gonna get swindled by overpriced products and then waiting for in store credit coupon to show up 😉

To generate a janma kundli, we then need to ascertain if DST is indeed in affect during the time of birth of the individual. The safest bet is to always ask the individual’s family about this parameter. If this option is not available and if the DST status has to be figured out from the date, here is a wikipedia article that could be referred to.

In United States, from 1987 to 2006, DST began on first Sunday in April and ended on last Sunday in October. Starting in 2007, daylight time begins on the second Sunday in March and ends on the first Sunday in November. This is a good website explaining history of daylight time in the US. In countries belonging to European Union, summer time starts on the last Sunday in March and ends on the last Sunday in October. The shift in time happens at 1.00 AM GMT. Here is a site explaining the rules for clock change in EU. DST has never been used in independent India, although we do see an example of DST being used during the second world war.

Once there is clarity about the DST status, the input screen of the janma kundli application should look like- 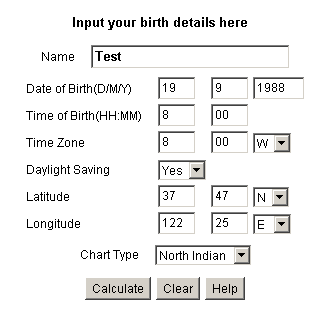 Figure 2: Input screen of horoscope application with DST in effect
Previous Next