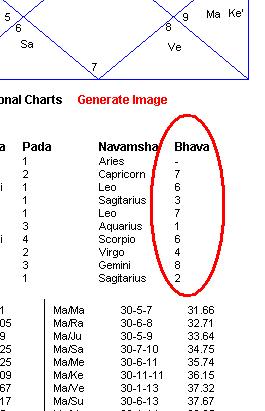 Finally, I got it right. There was a seemingly innocuous error in the code because of which the value of Midheaven was coming out to be wrong. Thus, the entire logic behind Bhava Chart was failing. Now, I have fixed the problem and would be publishing another version of my applet on the website soon. I just need to test it well.
After I publish the application on the web site, which would be in next few hours, I would request all users to check the data and notify me immediately if there are any errors. Besides testing for obvious errors, I have checked this application with three dob’s: mine, my wife’s and an example chart provided in “Astronomy and Mathematical Astrology, by Deepak Kapoor”. The values seem to be matching well.
This applet would now display the bhava values in the planetary Positions table. Please see the attached image.
How is a Bhava Chart Calculated? To calculate bhava chart, we need two values – Ascendant and Mid heaven. Ascendant is the sign rising in the eastern direction at the time of casting of chart. The longitudinal position of Ascendant is the mid point of the first house. Mid heaven is the sign directly above the head. It is the midpoint of tenth house. The steps to calculate mid points of other houses are:

Similarly, calculate the mid points of all the other houses to get the bhava chart. The starting point of a bhava is the mean of its and the previous house’s midpoint. Naturally, the end point of a house is the beginning of the next one.

How is Rashi Chart different from Chalit Chart?

1. Mathematically: Rashi chart assumes that all the houses are equal – 30 degrees in length. While calculating the positions of ascendant and other planets, we just take the modulo of the degree by 30 and assign the houses. In bhava chart, the mid point of a house, i.e. the bhava madhya, is given a lot of importance. The influence of a house is calculated based on this bhava madhya. e.g. if Ascendant value is 2 degrees, then the influence of the first house extends from approximately 350 degrees to about 17 degrees and not Zero to 30 degrees as would be the case with a rashi chart. The upper and the lower limits of influence of a house are called Bhava Sandhis. Planets are placed in this newly computed Bhava chart – and we get something called Chalit chart. The rule is simple, if a planet’s longitude is more than the starting sandhi and less than the end sandhi, it is said to fall in that bhava.

2. For interpretations: The combinations that are used for interpretations are – rashi chart along with divisional charts on one hand and bhava charts on the other hand. We never mix divisional charts with bhava chart. Planets influence a chart based on the bhava they are situated in. Rule of thumb – if an interpretation system works only with planets and houses and not signs, you can safely assume that it is working with the chalit chart and not the rashi chart. However, the aspects of planets on other planets are always studied from rashi chart. Similarly, exaltation/debilitation of planets is again studied only from the rashi chart. Manglik Dosha is studied partly from bhava chart (e.g. statements like Mars causes dosha if situated in 7th house) and partly from rashi chart. When looking for exceptions (e.g. Mars in Simha, i.e. in the sign of a friend does not cause dosha), we should see the rashi chart. Normally, bhava chart and rashi chart would agree with each other. However, if the Ascendant or planets’ degree is closer to multiple of 30, there may be differences between the charts. It is always interesting to see if a planet has moved from one house to another from rashi chart to chalit chart. This explains a lot of times why a yoga that is so obvious in rashi chart does not fructify in real life.

Update: This post is for Bhava Chart calculated using Shripati method. I have subsequently moved on to using bhava chart prepared using “Equal” houses method that does not take the midheaven into account. This method takes the midpoint of lagna as middle of first house and keep adding 30 degrees for midpoints of rest of the houses. Check out these two videos: